My friends often say they don’t know how to find their ancestors.  Genealogy Research is a wonderful hobby and the first thing out of my mouth in response to them is, “It’s easy.  Who were your grandparents?”  But, to be honest, I should let the secret out of the bag:   It is not all easy.  END_OF_DOCUMENT_TOKEN_TO_BE_REPLACED

Whenever researching deed records or estate records, expand your focus to include all given names with the same surname.  There are often children or siblings of your ancestor named in separate documents.  END_OF_DOCUMENT_TOKEN_TO_BE_REPLACED 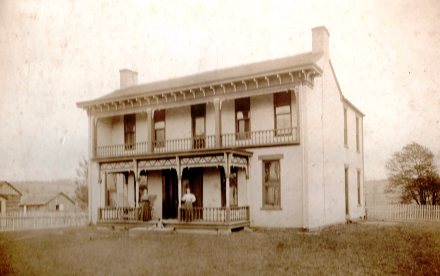 If you think you have found every document available about your ancestors…look again!  New records are indexed or published every day, online and in print.  It is worth a new search for every family member in your tree…not only for several generations back, but even for your grandparents!  How many spelling variations can there be for a surname?  Several, of course.  How many ways can old handwriting be transcribed?   Several more!  Try shortened versions of the surname in your searches…Vau for Vaughan/Vaughn, etc.  END_OF_DOCUMENT_TOKEN_TO_BE_REPLACED

A perfect library for a genealogist is one large enough to hold all of the records needed to research a family tree.  If your family lived in Kentucky in the 18th and 19th centuries, the Archives Research Room at the Kentucky Department for Libraries and Archives is a dream-come-true library!  It is filled with original and microfilmed primary source records from most Kentucky counties and it will be a library you will want to visit for multiple days.  Even if you only have one ancestor from Kentucky, plan to visit the Archives to search for their records.  This vast collection and ease of access, combined with the hospitality of the archivists, is impressive.   END_OF_DOCUMENT_TOKEN_TO_BE_REPLACED

If you have found your ancestor’s land entry in the BLM General Land Office database, you should have all of the information you will need to view or order a Land Entry Case File from the National Archives (the name of the Land Office, the Type of Land Entry, and the Final Certificate Number).  If you have not found an entry in the BLM database for your ancestor, or there is incomplete information, there are other sources to search. END_OF_DOCUMENT_TOKEN_TO_BE_REPLACED 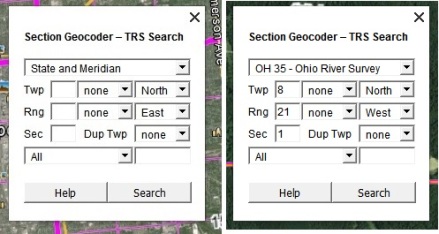 In my last post, Searching Land Purchases from the U.S. Government, I explained how to use the Bureau of Land Management’s web site and database to search for your ancestors’ land purchases.   Included on the BLM site is a mapping system to display the section, township, and range where their land was located.  But what if you could now place that one particular section of land into a current road map and then drive right to it using GPS coordinates?  Wouldn’t that be exciting?  Well, you can do that!  END_OF_DOCUMENT_TOKEN_TO_BE_REPLACED

In years past finding the record of an original land Patent Certificate was quite an undertaking.  Patents were granted upon the final payment of a land purchase from the government. It was the responsibility of the new owner to turn them in to the county auditor for a deed, and begin paying taxes. At one time I searched for a land Patent at the Ohio Historical Society Library in Columbus but was not able to view the patents because they were in another area being indexed. The staff saw my disappointment and retrieved a xerox copy of the information from a land entry book that included what I was searching for.  Their holdings include the original land entry books kept by the Ohio Auditor of State which list the first purchasers of land in Ohio from the government. END_OF_DOCUMENT_TOKEN_TO_BE_REPLACED

Kentucky “boots on the ground” research is a fairly new adventure for me.  One family surname in my tree, Pyle, has a large branch who settled in Washington County.  The county was created in 1792…the year Kentucky separated from Virginia and became a state.  Springfield is the county seat.  Abraham Lincoln’s father, Thomas Lincoln, and his parents’ family moved into Kentucky in the 1780s.  After the tragic death of his father (also named Abraham) at the hands of the Indians in 1786, his mother moved the young family to Washington County.  END_OF_DOCUMENT_TOKEN_TO_BE_REPLACED

My hope is that, by now, you are more interested in doing some “Boots on the Ground” research in the counties where your ancestors lived and died.  In case you are still not convinced, I will continue with information about research in Ross County.  As I share the specific visits to various counties with you, I am skipping around between families I have researched.  If any of these families are your lines and you would like to discuss them further, please use the “Contact” page to send me a note.  I will be glad to share any other information I have. END_OF_DOCUMENT_TOKEN_TO_BE_REPLACED